Arena 3 saw a very large British Horse Feeds Speedi-Beet HOYS Grade C qualifier get underway with 88 competitors. Each fence posed a different question and caught many out, leaving 16 combinations to go through to the jump off. Rising to the occasion with nine year old gelding Fremont VDL, Angie Thompson prevailed to take the sought after HOYS qualifier. 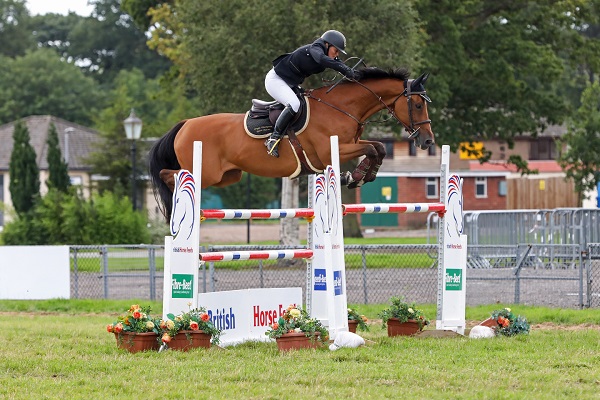 The combination travelled up for the day to purely to contest this class. Angie was originally drawn to go last in the jump off but due to drawn orders in ring 1, she moved up the order to be the penultimate rider in the ring. She said: “We have recently stepped up to jumping 1.40’s/1.50’s, so he’s at the top of his game. We qualified for the same class at HOYS last year and came 8th in the final, so all we wanted from today was to come back and qualify for this class once more whilst he’s still eligible to jump it.”

Allan Birch and Cisco van het Rubenshof take second place, with Chloe Reynolds and Quantify taking third place. All of which qualify for HOYS in the Grade C Championship.

British Horse Feeds, makers of Speedi-Beet, is the equine feed division of I’Anson Bros Limited and is based in Masham, North Yorkshire. British Horse Feeds is best known for its flagship product ‘Speedi-Beet’ which, thanks to the unique patented process has revolutionised the feeding of beet pulp. Speedi-Beet has improved nutrient availability and soaks in just 10 minutes, compared to 24 hours for sugar beet pellets. It’s a great way to add quality fibre to your horse’s diet for slow release energy. Fibre-Beet, a formulated blend containing Speedi-Beet and alfalfa has the benefits of Speedi-Beet with extra conditioning. For more information contact British Horse Feeds on 01765 680300 or visit our website on www.britishhorsefeeds.com.