Derriere Equestrian are delighted to announce Alexandra Phillips BSc (Hons), AMTRA, PGCE, has been appointed as the new Brand Manager. Alex has worked closely with the team since launch in 2014 and is perfectly placed to take Derriere Equestrian forward, with the continued successful growth of the Brand. 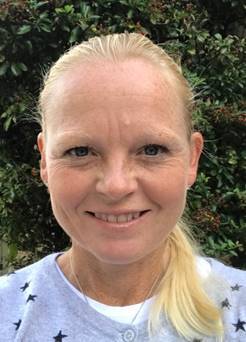 With a wealth of business experience in the Veterinary and Animal Health Industries, and an in-depth knowledge of the workings of the Equestrian World, Alex will be an invaluable member of the team. Driving forward continued growth in sales, marketing and being an excellent support to all Trade B2B clients.

Born and brought up in Hong Kong, her passion for all things equestrian started at the Royal Hong Kong Jockey Club Riding School in Pokfulham aged 7, when learning to ride on ex racehorses and Icelandic ponies.

This interest progressed to gaining the dressage scholarship at Hartpury College in 1994 and gaining her degree in 1997. While at Hartpury, Alex founded a strong friendship with Derriere Equestrian founder Claire Galer and they have enjoyed working closely together through various points in their careers ever since.

Following graduation with a BSc(Hons) Degree in Equine Science, Alex progressed into an outstanding career in the pharmaceutical industry spanning 15 years. With positions held at Pfizer (Zoetis), Ceva and MSD in both equine and companion animal divisions as a Senior Sales Manager.

In 2004 she gained a PGCE in secondary science and taught in a comprehensive school from 2004-2007 before returning to industry from 2008-2013. Following a successful career in industry she returned to teaching becoming head of department and head of KS5 in 2017.

All through this time Alex has pursued her love of Dressage, both riding, competing and now breeding her own Dressage ponies. Alex started as a teenager training with Franz Rochowansky, and then trained with Pammy Hutton, Tessa Thorne, and Isobel Wessels and is currently training with Sally Thorndale, aiming for medium level on her own ID rescue horse and at Elementary on her own Welsh Section C pony this year.

Alex has had a keen interest in Derriere Equestrian from its inception by Claire Galer to the huge success that it is today.

“I’m excited to be joining a company that has been close to me since it first launched in 2014. I have watched DE grow from strength to strength to become the most innovative equestrian underwear manufacturer in the industry, and I am looking forward to being a part of it’s progression as it grows in success worldwide” Alexandra Phillips BSc (Hons), AMTRA, PGCE