THE CSI2* Grand Prix brought the curtain down on the first and hugely successful Equitop Bolesworth Young Horse Championships.

With 50 starters over the Rafael Suarez course in the International Arena, competition was fierce for the final competition.

Thirteen made it through to the second round with the stage set for an exciting finale in front of an enthusiastic crowd.

The class really came alight with seventh to go, Louise Simpson and the stallion, Jenson 55 who moved at a pace across the arena to finish in 36.71 seconds.

Just two horses later and it was the turn of Annabel Shields and the grey mare, Creevagh Carisma who took the class by storm, her long stride jumping into the lead by two seconds for the delighted Durham rider 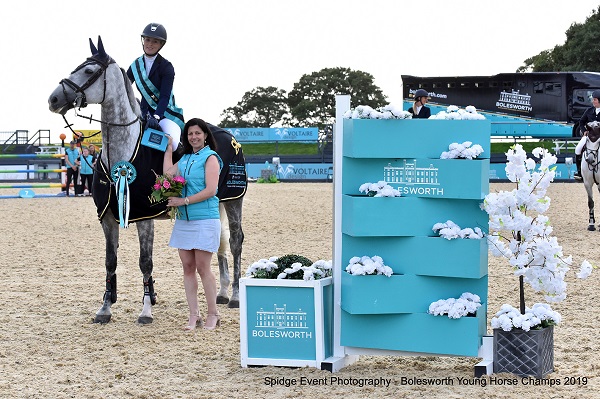 Said Annabel: “She has really stepped up to the bigger classes in recent months and just gets better and better.

“She has a big stride which really helped save time as there was quite a bit of galloping in between the fences and I also have a lot of trust in her.

“I have ridden her since last May but earlier this year bought her from Victoria Gibson who my dad (Robert) has trained.”

Known as Chloe at home, the mare competed in the Newcomer and Foxhunter finals at HOYS last year and Annabel has high hopes that she will go all the way to the top.

Following straight after and with a determined look, it was Anthony Condon and Zira vh Kapelhof Z who battled hard in a bid for glory, just missing out to take eventual second place.