It proved another thrilling showcase performance from Charlotte and the exciting 10-year-old mare Mount St John Freestyle - a horse that could take her all the way to next year's Tokyo Olympics. 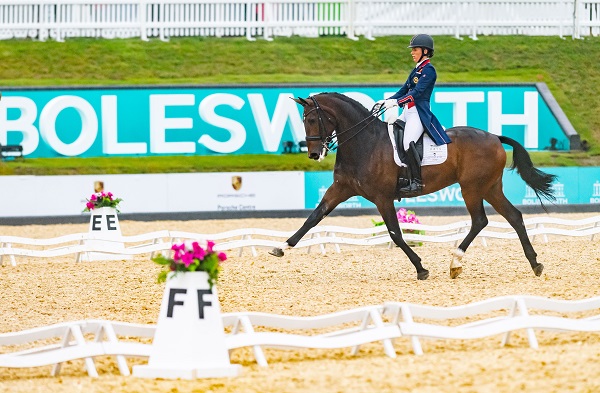 They delivered a dominant display in the Theraplate UK Grand Prix, finishing on top by a considerable margin from fellow British rider Gareth Hughes, with Classic Briolinca.

Charlotte's score of 80.348% included a perfect 10 score for the extended trot from British judge Jo Graham, and it was another impressive day's work by a combination tipped in many quarters to reach the dressage summit.

And to complete a memorable day for the London 2012 and Rio 2016 gold medallist, she also took third spot aboard another rising star Erlentanz.

Less than 0.2 of a percentage mark separated the riders in second, third and fourth, with fifth place going to Richard Davison and Bubblingh and Emile Faurie taking sixth on Cafe's Caletta.

Reflecting on the grand prix, Charlotte said: "It was Mount St John Freestyle's first event since the World Equestrian Games last September, and at the beginning of the test I was rushing her a little bit.

"But I was absolutely thrilled with her. She tries so hard, and there were so many highlights. Her canter work felt very solid, and she feels so much stronger than last year.

"She is still only 10, so has not got very much mileage, so to come here in this arena and perform the way she did, I am absolutely delighted.

"Erlentanz is a new ride this year, and I am really pleased with him. He's such a genuine horse, so much fun to ride, and gives so much."

Charlotte, who looks well on course to launch a major medal challenge at Tokyo 2020, has been a major supporter of dressage at Bolesworth.

"I love Bolesworth," she added. "To be able to have a show like this in Britain is fantastic, and I have to thank the whole team at Bolesworth for setting it up."