Nicole Pavitt continued her recent domination of the Connolly's Red Mills Senior Newcomers Championship with a stylish performance at the Horse of the Year Show. Just two combinations - Sussex-based Nicole on her mother Sandra's HC Cornet and Adam Botham, riding Jerome Du Luot - went clear in round one from 22 starters.

Nicole then set a time of 48.51 seconds, but although Adam jumped more than a second quicker, he agonisingly had the final fence down. Mark Edwards and Montreuxs Tale, one of seven four-faulters, finished third.

Nicole's latest triumph followed victories in 2012 and 2014, and she has predicted a bright future for the seven-year-old bay gelding.

"I have been very lucky in this class," she said. "This one (victory) was probably the most stressful; with just the two of us through to the jump off, I was determined to jump clear and put the pressure on Adam, and luckily it worked in my favour. It feels different in a two horse jump-off, but I have previously been in a similar position and jumped first then went on to win, so it must be my lucky spot!

"I think he [HC Cornet] is going to be a superstar, a grand prix horse for sure. I got him in April - he had only jumped two 1.10metre classes beforehand - so he is very green in terms of his career. Coming here I didn't really know what to expect, but he has so much talent that I knew if I could get him relaxed, he was going to jump clear. 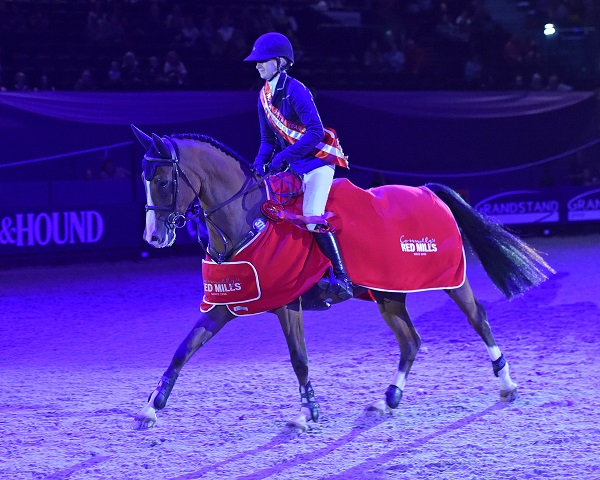 Connolly's RED MILLS is an Irish family owned company, providing precision nutrition for a wide range of equine needs. The company was established in 1908 in Co. Kilkenny, and today, exports to over 50 countries worldwide. For people who value their horses as high performers, Connolly's RED MILLS has been the automatic choice for over 100 years. We know just what it takes to get you the best results in terms of equine nutrition, health, well-being and performance. Some of the most successful high-performance sport horses in the world have been fed on Connolly’s RED MILLS and we are delighted to launch our new dedicated Sport Horse range of feeds. The quality products that produce these results are supported by nutritional research along with some of the most technologically advanced innovation and manufacturing processes in the world. For further information, please visit www.redmills.co.uk/Horses/Home.