Haygain - Q & A on respiratory health

"Respiratory health is essential to performance," stresses Dr. Emmanuelle Van Erck Westergren of a key focus at her Equine Sports Medicine Practice in Waterloo, Belgium. The prominent veterinarian and thought leader spent 15 years engaged in equine health from a University-based perspective. She then left academia to apply that knowledge in private practice, immersing herself in a 360-degree perspective on horse management. Equine Sports Medicine Practice specializes in high performance horses and prioritizes prevention and career longevity. 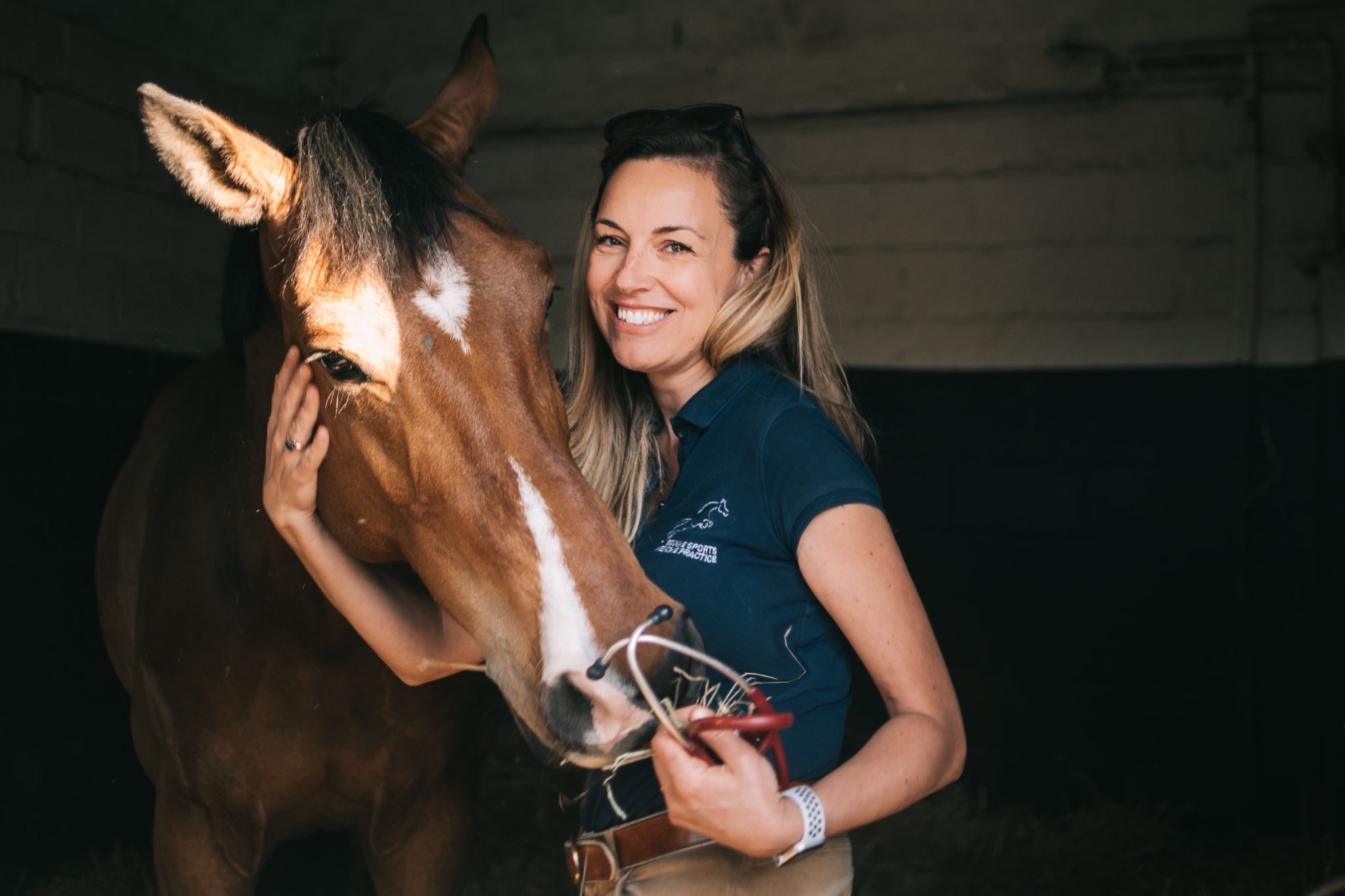 "I want to help horses compete successfully over a whole season and a whole career," Dr. Emmanuelle explains. Accomplishing that involves working with owners to evaluate and implement best management practices related to every aspect of their horse's health. Respiratory function is critical to that, yet often under-appreciated and misunderstood. Worse, warning signs of trouble are easily missed or misinterpreted.

Q: How is the equine respiratory system different from a human's?

Several factors contribute to the horse becoming deficient in oxygen even in sub-maximal levels of exercise. This state is called hypoxemia. In man, oxygen levels stay the during all levels of exertion.

Q: What are those factors?

1) Horses breathe only through their nose. There is no communication between the oral cavity and the airways. Think about exerting yourself while only breathing through your nose.

2) Their narrow upper airway and the long distance from there into the lungs makes it that much harder to move the column of air in and out. It's "dead space"

because nothing happens to the oxygen during the trip. It is only transferred to the blood stream when it gets into the lungs.

3) Horses breathe in and out at the same rate as their gait. As they canter or lope, they inhale in suspension, and exhale when their first foreleg hits the ground.

Standardbred trotting horses have an advantage because, if they become oxygen deficient, they can take a big breath over several trot steps. A Thoroughbred

racehorse is limited because they can't compensate with a big breath over a few strides. They have to breathe in and out with their stride. As they become

oxygen deficient, they have to breathe more often, which means shortening their stride.

5) Horses have a higher heart rate and that faster circulating blood means it doesn't stay anywhere long enough to output all the oxygen it carries.

Q: Will the horse's ability to intake and use oxygen improve as his fitness improves?

Unfortunately, no. The horse's muscle and heart function adapt and improve with conditioning, but the oxygen capacity of its respiratory system does not. Human performance is limited because we have small hearts. Horses have big hearts that get bigger and can pump more blood with conditioning, but their performance is still limited because the respiratory system can't deliver enough air oxygen to the muscles.

" Because of all the limitations, even a little bit of inflammation or obstruction anywhere in the respiratory tract has a big impact on performance "

Q: How often to you see sport horses with some type of respiratory disease?

Too often! We have tracked 400 cases in which horses were referred to our practice for poor performance. Between 50% and 80% had some degree of respiratory disease. Eventers had 100% and international show jumpers had 85% at the high end, while driving and leisure horses were at the "low" end with 50% affected. In a study published last fall, we found that 88% of 731 horses referred for poor performance had Inflammatory Airway Disease, a range of conditions on the milder end of the Equine Asthma Spectrum.

No. Most of the complaints were very unspecific. "Feeling heavy" is a top complaint. Heavy breathing, breathlessness, lack of energy and slow recovery times are more common complaints. Owners rarelyseldom noted coughing or nasal discharge, which are more clear symptoms of respiratory problems.

Q: What are some of the biggest risks to respiratory health?

Respiratory diseases fall into the category of Equine Asthma, a relatively new label in veterinary medicine. Some horses have a genetic predisposition for it, but otherwise it is an occupational disease. Environment, stresses of training and competition which can lower immunity, and mingling with other horses are all risk factors for Equine Asthma.

Q: How do you figure out what's causing the problem?

I look at the horse and his environment. We do measurements of dust levels and samples of contaminants. Some are easy to see. Have you seen someone sweep dust from the barn aisle, then stash that in the horse's stall? Or seen mold stains on barn walls or ceilings? A condition called Sick Building Syndrome exists in human medicine and it can apply to horses, too. They may not be coughing or having nasal discharge, but they clearly don't feel well. That can often be linked to the amount of contaminants growing inside the building. Horses were designed to live outside, but many horses spend 23 hours a day in the barn. Living inside, the quantity of inhalable irritants they're exposed to 50 times more inhalable irritants multiplies by 50%!. Even if they live outside, if they're getting hay with contaminants, it's still a problem.

Q: Does weather affect the amount of contaminants to which horses are exposed?

Yes. Europe experienced particularly warm weather this year, and earlier in the spring than normal. That corresponds to a record number of respiratory cases, as did record pollen levels with record numbers of asthmatic patients.

A Canadian study found a correlation between the temperature and humidity and worsening symptoms of equine asthma. And global warming is having an effect because there is a shorter or non-existent period when there is a layer of frozen ground. That all affects the number of contaminants, including fungi, mold and bacteria found in soil, in which hay or straw is grown.

It is. Fungi, which is the same as mold, can be very allergenic because it has proteins that can trigger a very strong reaction. It can become infectious and start to grow inside the horse's airways. That process can produce toxins and irritations to the respiratory mucosa, which can ultimately affect the throat muscles. Fungi can also also trigger inflammatory responses that manifest as rhinitis and sinusitis. The role of fungi is not yet broadly recognized in the veterinary world. When a fungal infection is suspected or diagnosed, current treatments often include corticosteroids to address inflammation. Those further depress the immune system, enhancing the opportunity for fungal infection.In our study of 731 horses referred for suspected respiratory issues and/or poor performance, 88% were found to have Inflammatory Airway Disease. Horses with fungal elements in their airway were 2.1 times as likely to have IAD. A study in Australiawe did on sport horses, we detected a link between fungi in the airways and the likelihood of Exercised Induced Pulmonary Hemorrhage: a horse is seven times more likely to bleed from the lungs, through the nose, during extreme exertion when they have fungi in the airways. In the United States, this could get a lot of attention as racetracks are in the process of phasing out Lasix, the medication that reduces EIPH.

Q: That's a lot of bad news. How can we protect our horses from these microscopic assailants?

Assess and improve your horse's environment!

1. Make sure there's ventilation in the barn. That means circulation and renewal of the air. If there's no renewal, moisture will accumulate and foster contaminant growth. Cobwebs indicate there isn't enough ventilation because spiders won't make them where there's any breeze.

2. Reduce dust: the fine dust that can be inhaled and lodge in the airways and deep in the lungs.

3. Look for signs of mold on walls, everywhere and especially on walls near stored hay.

4. Look at floor mats: specifically, what is growing between and underneath them. Urine accumulation can make it really dangerous and gross. It's awful for horses and people. Stables don't have to be sterile, but they do need to be clean.

Q: What about hay & bedding?

Both play a big part in respiratory health. I strongly advise all my clients to get a Haygain Hay Steamer because it reduces 99% of the fine, respirable particles and kills fungi, bacteria and yeast in hay. Ample scientific studies demonstrate the benefits of killing the fungi/mold. It hasn't been studied yet, but I think killing the bacteria has a positive impact on horses' digestive function. I would like to look into that. When it comes to preventative medicine, Haygain is something that speaks for itself over time. That's why you don't see many hay steamers for sale second-hand. Once horse owners adopt it, they don't go back. As for bedding, first consider flooring that can be disinfected. Then, wood shavings are better because wood contains terpene, which is a natural anti-septic. Cardboard and paper shavings are cleaner options. Straw, on the other hand, can foster bacteria and fungal growth. 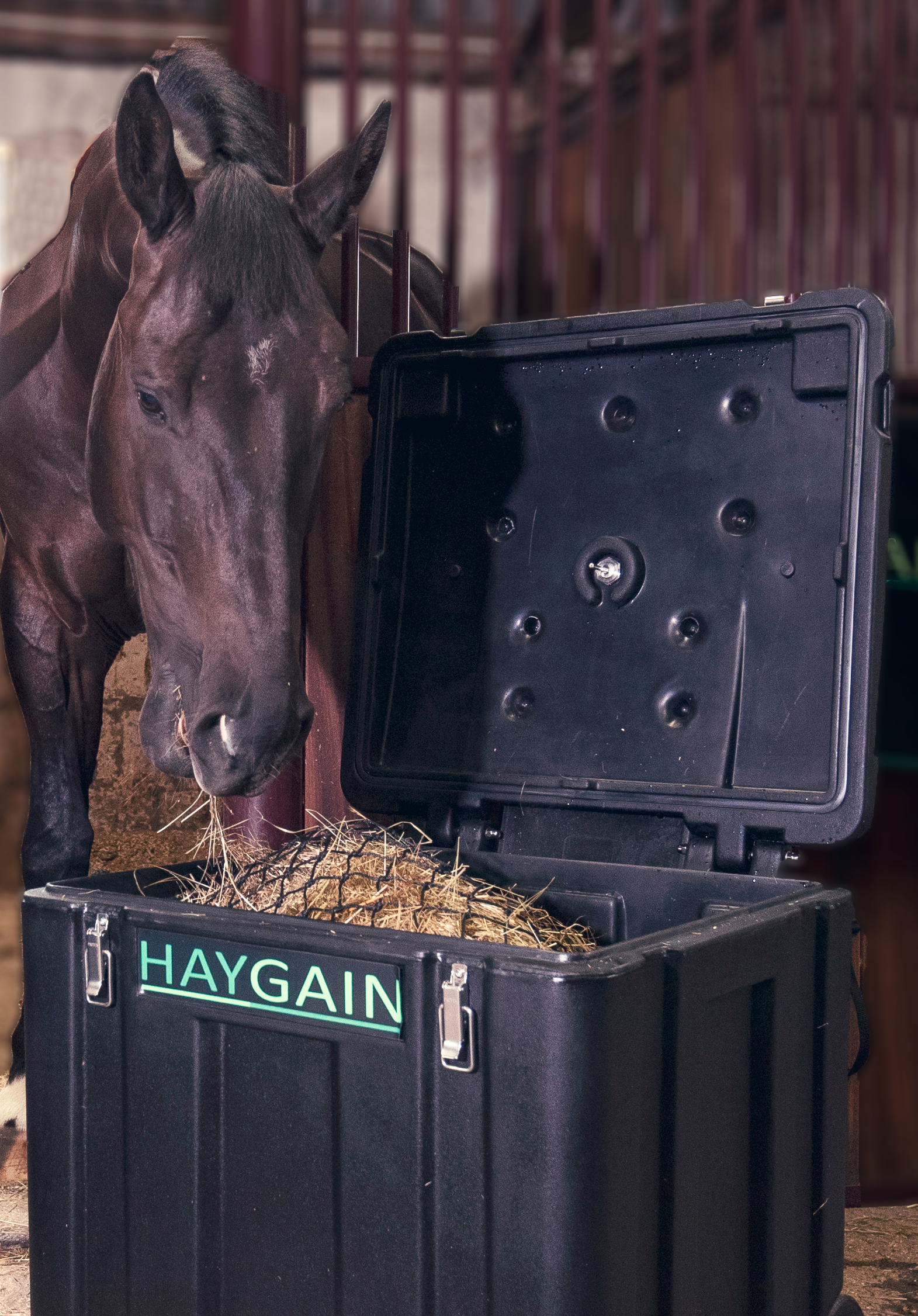 Q: What about homemade hay steamers?

Not an option. Temperatures need to reach the range of 212F (100C) to kill bacteria and fungi. Steaming at lower temperatures actually serves as an incubator for contaminants. This happened with a dressage horse referred for coughing while exercising. Using an over-ground endoscope, we determined found he had an obstruction in his upper airway. Determined to help their horse, the owner had made their own hay steamer. What happened, though, was putting contaminated hay into what was, in effect, an incubator. It wound up culturing fungus to the highest level, to where the fungus produced neurotoxins that affected the muscle function.

Q: How receptive are horse owners toward these preventative measures you recommend?

As a sports medicine practice, we work mostly with high level competitors. It has taken a while to educate our clients. As we treat horses year to year, if we are always treating the same problem, I like to review the management over going first for medications. As horses do better over the long term, the results speak for themselves.

Find out more about Haygain steamed hay at www.haygain.co.uk