The crowd were treated to an impressive display of teamwork by all horse and rider combinations competing in the National Para Equestrian Championship, which took centre stage in the JS Teamwear Championship Arena 2 this afternoon. The Championship consisted of four  titles which were awarded to the various grades. The grading system ranges from Grade I, II, III, IV with grades representative of the competitor’s level of disability. 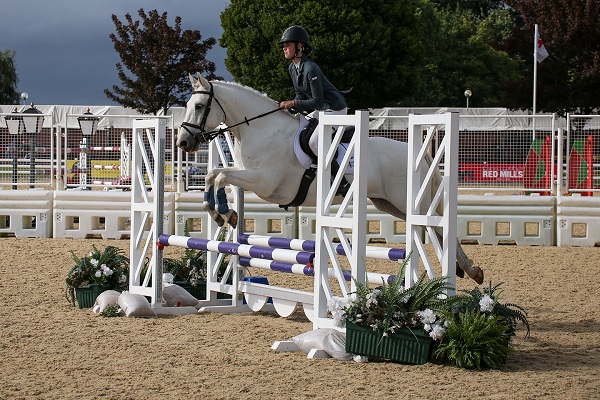 The first Championship was the 90cm Grade III which was won by reigning Champion, Toby Bevins. Toby left everyone for dust  with his speedy grey, Baloe V. “I’ve had Baloe for just over two years and our partnership is getting stronger and stronger. Both of my horses are very nice and kind, they know what to do when I have a problem,” explained Toby. The combination will be heading off to the Scope Festival Championship next week, where they hope to have just as much success.

Flossie England, aged 14, is the reigning Grade III Junior Champion. This year she takes the win on Mcrim Eamoom Ban, “It’s my fourth time at BSNC and I really enjoy it. Last year I won this class as well”, Flossie continues to say “He’s really sensible and good but he does pretend to be scared of things, so it’s really good to come here and do well,” she said, adding that taking the championship was their only class of the weekend, making  the journey from Lincolnshire well worth it.

The Grade II 80cm Championship was won by Amy Sandford with Javito. “I was so nervous today and I’m not sure why, It could possibly have been the weather, but as soon as I went into the arena that was it”. Amy continues: “I just heard the bell, the adrenaline kicked in and I was ready to go”. Amy travelled from Yorkshire, and is now focusing her efforts on trying to recruit new Grade II riders.

The combination of Ronnie Robinson and In A World Of His Own won the Grade I 70cm after posting a great round, “I’ve only ridden In a world of his own once before, so I couldn’t be more chuffed with the result of this class”. Ronnie explained that his main goal for the future is to inspire other para riders, to prove that anything is possible.