The long list of impressive acronyms after Dr. Kate Allen's name reflects her many years of academic study, research and hands-on veterinary experience, all with an emphasis on equine sports medicine that is her specialty and expertise.

She also has extensive saddle time, including upper-level eventing. That gives Dr. Allen a visceral sense of the respiratory system's role in whether or not the large, immovable obstacles are safely sailed over or the timers crossed punctually after a many-mile, high-speed gallop.

Journalist Kim F Miller enjoyed quizzing Dr. Allen on how respiratory problems are detected, prevented, managed and treated and how all that has evolved in her practice of caring for high-end race and sport horses.

Dr. Allen is a Royal College of Veterinary Surgeons' Recognized Specialist in Equine Sports Medicine. Her degrees and certifications include BVSC, PhD, CertEM, DipACVSRM and MRCVS. 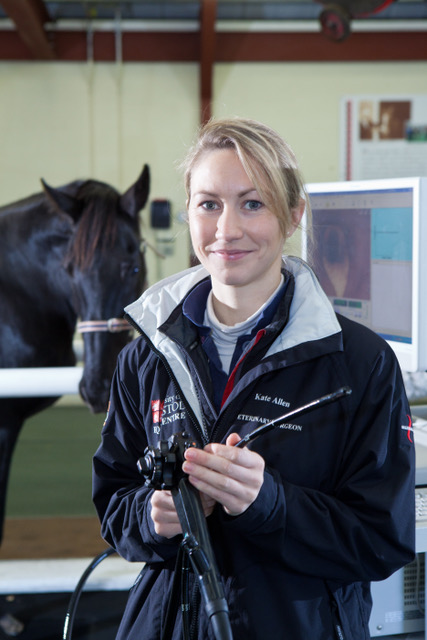 Kim: How did your interest and expertise in respiratory health evolve?

Dr. Allen: I've always dealt with the medicine aspects of treating the horse as an athlete. Respiratory function became a focus because, in racehorses, it is the limiting factor to performance. Any degree of respiratory disease, even very mild respiratory disorder, is going to impact performance.

Kim: What changes have you seen in recognition of respiratory problems and their role in performance.

Dr. Allen: Going back over a decade or so, when a horse was presented to the vet for respiratory disease, it was often quite obvious symptoms and a severe case of what we now call Equine Asthma. The horses came to us after acute asthmatic episodes: a heaving horse or pony, for example.

We don't see that so much anymore. There's been a gradual transition to seeing horses with mild signs of chronic asthma: like coughing, at rest or exercise. Now, there is such a focus on optimizing performance and the progression of diagnostic testing, I now see horses in which the signs are pretty subtle.

A large proportion of the horses I work with are racehorses and moderate to high level jumping and dressage horses. In those populations, the symptoms are rarely obvious.

Kim: Do the people who care for horses in these groups differ in why and when they suspect respiratory problems?

Kim: What are those subtle signs?

Kim: What about respiratory recovery rate?

Dr. Allen:  Prolonged respiratory recovery rate is a big thing I get called about: horses that seem to puff a long time after exertion.

Respiratory recovery rate is more difficult to monitor than heart rate. There is a lack of equipment to accurately measure respiratory rate during and after exercise, so we vets know less about it. It is affected by many factors:  fitness, how strenuous the exercise session was, temperature, etc. So, it's difficult for owners to know when respiratory rate recovery is appropriate and what the number might indicate regarding their horse's health.

However, if two similar type event horses did the same work on the gallops, and one had recovered quickly by the time they had reached the stable, but the other was still blowing hard, that would be an indication that something wasn’t quite right – most likely with the second horse's fitness/ training level or with the respiratory system.

Dr. Allen: Yes. We would normally say 8 to 16 breaths per minute when resting quietly in the stable is the normal range. If your horse's at-rest respiratory rate goes up, that's probably a sign of more significant respiratory disease.

The pattern of the breathing is important, too. In humans, there is something called "breathing pattern disorder" or "dysfunctional breathing." It's early days, but we think something like that exists in horses, too. In addition to the rate of breathing, you should look for regular or irregular breathing patterns and how often your horse is taking big sighs to expand their lungs.

Kim: When would poor performance tip you off to a respiratory issue?

Dr. Allen:  Musculoskeletal issues are the #1 cause of poor performance, followed by respiratory, then gastric issues. If I didn't know what was going on with the horse, I'd first look at it from the lameness standpoint, then a general clinical exam, listening to the heart and lungs. Fairly soon after that, I'd scope the airways and, potentially, the stomach.

Dr. Allen: First, I look at breathing rate, pattern and effort. Then, with a stethoscope, I listen for a normal breathing in and out pattern. With asthma, you start to pick up wheezes, particularly on the exhale. However, the horse can still have respiratory problems that can't be picked up on a stethoscope.

Kim: Why does an asthmatic horse only wheeze on the exhale?

Dr. Allen: Because asthma narrows the airways, so the wheezing comes from more breath moving through a smaller passageway.

Kim: When is a respiratory exam part of a pre-purchase exam or routine wellness exam?

Dr. Allen: With a pre-purchase exam, the complaint that would prompt that tends to be abnormal noise during exercise indicating a structural or functional abnormality in the upper airway. As long as a clinical exam indicates normal respiratory function, it's less likely we'd do further respiratory diagnostic investigations as part of a pre-purchase.

For general wellness exams, that's pretty case dependent. For horses in "regular" work, this will involve annual vaccinations and a fairly simple look at the heart and lungs. For high end eventers and other sporthorses, the end of the season might warrant a thorough exam including a tracheal wash to look for indicators of airway inflammation. And racehorses in the UK have an endoscopy and tracheal wash several times during the season.

Kim: When is it enough to address respiratory concerns by just cleaning up the air in the horse's environment versus going ahead with a clinical exam.

Dr. Allen: That discussion should always be had between the veterinarian and the horse owner. Cleaning up the horse's environment is always a good thing, whether preventing or managing a respiratory problem. As for medications, a vet is unlikely to prescribe any without doing a thorough exam. 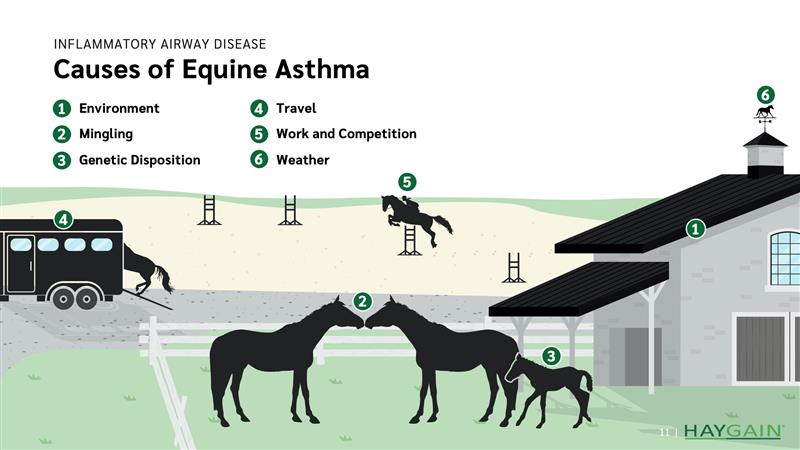 Kim: Prevention is always important. Is that even more true with respiratory problems?

Dr. Allen: Yes, and especially because many of the risk factors can be minimized with good stable management. You should never wait for a problem to arise. You want to prevent respiratory problems from the word go and keep the lungs as healthy as possible throughout the horse's life.

Not all cases on the mild end of the Equine Asthma Spectrum progress to more severe respiratory disease, and some more severe cases can be reversed or at least managed. However, the longer it is allowed to progress, the more time and expense will be needed for treatment and, most importantly, there could be some damage to the lungs themselves. And during that time, the horse's well-being and performance will suffer.

Kim: What preventative measures are most effective?

Dr. Allen: You want to look at everything in the horse's environment and how much time does your horse spend in that environment. It's easier to manage horses that live outside, but racehorses and many sporthorses spend a lot of time inside.

Start with the ventilation. I much prefer that people put an extra rug on their horse and keep the stable windows open.

Look at the forage. A lot of race yards and a lot of my clients use the Haygain Hay Steamer, which eliminates up to 99% of the dust, mold, bacteria and other allergens commonly found in hay, even good quality hay. These are all microscopic irritants that can get into the airways and lungs, where they cause irritation and inflammation as the main triggers for Equine Asthma. I use a Haygain for my own horses.

Kim: What's going on with your own riding?

Dr. Allen: I have evented up to the old 3* level and I now have a lovely 5-year-old that I hope to begin competing in the spring.