A seven-hour round trip to jump just one course was all made worthwhile as Mia Clegg-Ingram from West Yorkshire was crowned Champion in the Stepping Stones 138cm Championship Final this evening at the British Showjumping National Championships.

Only 10 out of the 57 starts managed to battle their way to the jump off, of which just three made it through with a double clear. Several fences proved difficult in round 1, including fence 5 which appeared just as tricky when appearing again in the jump off. Many hopefuls also fell at the first hurdle, with a tempting risky turn after fence 1 forfeiting their chances of taking the title.

Twelve-year-old Mia and the ever reliable Parc Rob took the title of Stepping Stones 138cm Champion in an intense finish with an impressive 40.14s on the clock: “I thought the course looked quite big and very technical, but Rob is such a keen jumper and never touches a pole that I was confident in our chances in winning the class.”

Coming in exactly half a second behind Mia with a time of 40.64 was Ruby Birchenough aboard Glenwood Stud Dark Emerald. Ruby set the bar as first to ride in a speedy jump off, however Mia just managed to steal the crown with a heart-in-mouth finish due to Parc Rob’s generous striding.

Mia seems to have had a successful Summer competing, winning her two qualifying 138 Stepping Stone classes back home. The pair are heading home happy with a “100% success rate” after winning her only class of the Show. Next on the cards for Mia and her beautiful bay, Rob, is Pony Club Camp over the coming weeks after a thoroughly entertaining round to end the JS Teamwear Championship Arena 2 this evening.

Eloise Squibb and Rudgeway Maestro were crowned the winners of the Blue Chip Pony Newcomers Masters in the final class of the day at the British Showjumping National Championships 2019.  As the combination were early to go in the jump off, they knew they had to be quick. Jessica flew round the up to height course and finished 0.3 seconds ahead of second place Glain Watkin Jones. 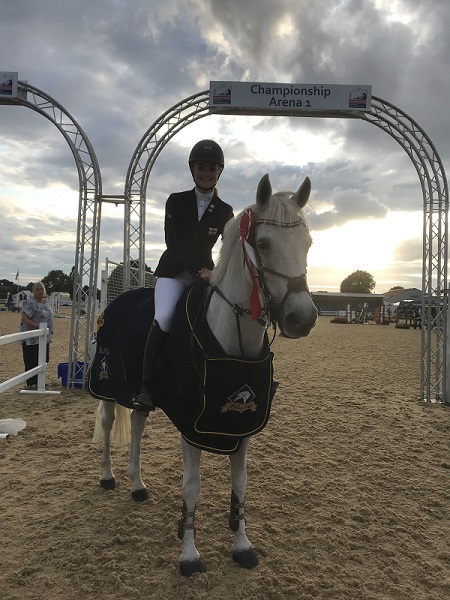 Jessica has travelled from Essex and has been riding Rudgeway Maestro for only two months. In their first couple of months together they have had a huge amount of success qualifying for the Pony Newcomers and Foxhunter Final at HOYS. Pleased with the early success of their new partnership Eloise exclaimed: “I knew I had to be quick as I had fast competitors behind me- so I was”.

The combination will be competing in the Pony Foxhunter Masters tomorrow, and hope to have the same result.

Blue Chip Feed Ltd produce the highest quality feed balancers and supplements available in the UK; there is a feed balancer for every stage in a horse’s life to ensure optimum health and well-being. Blue Chip products are exported worldwide. For more information please visit: www.bluechipfeed.com

Gerken steps up to the challenge in exciting jump off

Hollie Gerken left the crowd on the edge of their seats as she raced to the top spot in the Stepping Stones 128cm Championship jump off this afternoon. There were 30 clears out of 75 starters in the penultimate class of the day in the JS Teamwork Championship Arena 2 at the British Showjumping National Championships 2019. 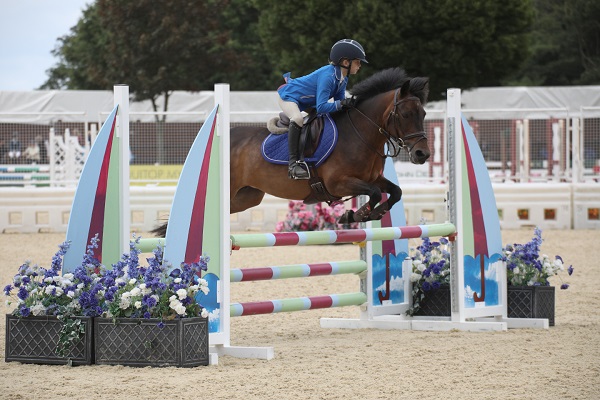 Riding multiple ponies at this years’ show British Showjumping National Championships, Hollie at just 9 years of age showed expert skill as she breezed through some tight turns and sped her way to a win with her beautiful bay, Dimples Dilema in a jump off of just 35.33s. No stranger to big wins, this combination qualified for the 128cm Mini Major Olympia and also secured the Pony of the Year Show 11 & Under title earlier this year.

When asked about Dimples Dilema, Jade affectionately explained how “if I miss a turn she makes up for how fast she goes in between fences” and mum, Jade Gerken, remarked that “she’s been an awesome pony”.

The next challenge for the champion combination is the Pony Bronze League 128cm Final where the young rider hopes to secure another title in what has been an amazing year so far.

It was Kent based showjumper, Scarlet Clark- Murphy aboard the 18 year old grey gelding, Ballyleak Silver who was the eventual winner of the All Horse Magazine 80cm Pony Open. The class had an overwhelming amount of entries which led to a great start to the competition on day two of the British Showjumping National Championships 2019. With 106 entries, it was an extremely quick class with the winning time being under 22 seconds in the jump off phase. 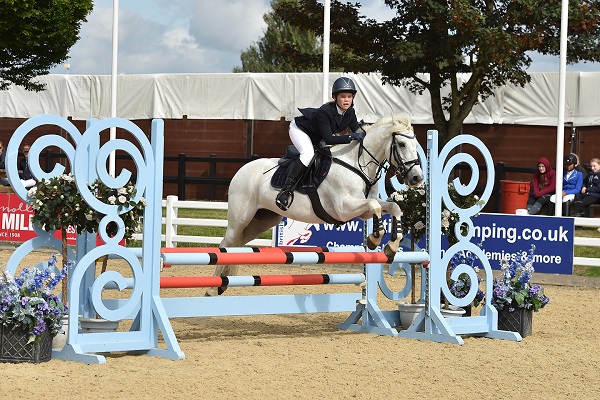 Ballyleak Silver produced a stylish round in record time having produced a text book clear round with some hand brake turns in the jump off.  Scarlet, aged 13, has had the ride of Ballyleak Silver for the past two and a half years, and in this time has transformed a riding school pony into a show jumping champion. “I said to my mum before I went into the ring I need to get under 22 seconds, but he doesn’t usually go that quick- so it was all or nothing.”

The winning combination will be contesting the Pony British Novice Championship Final this afternoon. In second place was Grace Dew with Coshla Mid- Knight,and in third was Millie Mackey with Knickerbocker Glory.

The second class of the day in Championship Arena 1 had an incredible 94 starters and lasted over five hours seeing rider after rider enter the ring to contest the sought after title here at the British Showjumping National Championships 2019. Remaining cool under pressure, the eventual winner was Eloise Burden with the 5 year old mare, Happy Hero. The jump off was extremely close with just 0.01 seconds between first and second place. Eloise explained afterwards: “I thought my time was beatable, and it was extremely close!” 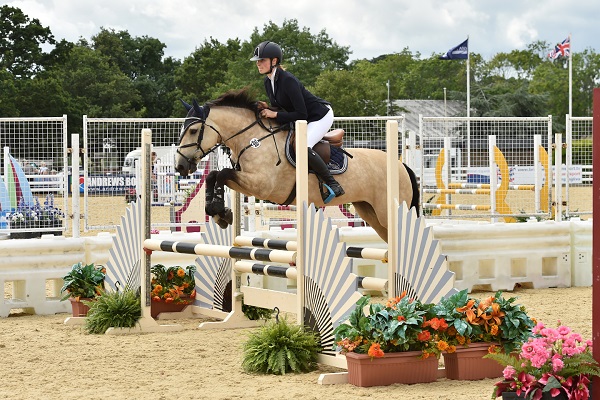 The pair have travelled to the Championships from Bicester, and this win has continued the combinations fantastic form after winning at Pony of The Year Show earlier this year.  “I didn’t think I would win this class after  winning at POYS this year- I thought it was a one off.” This is Eloise’s last year in juniors, and after taking two prestigious titles this year, she will definitely be finishing the season on a high.

Eloise still has a couple more classes to compete in at this years National Championships and then will be heading off to the Scope Festival with Happy Hero.

Pony Silver league 128cm Final and the 138cm & under Final

Over a demanding course set by Jason Abs, Ted Holt riding Gemma Stansby’s Ashurst Quicksilver III, reigned supreme in the Pony Silver League 128cm final. The course set for the second class of the day in the JS Teamwear Championship Arena 2 proved a difficult question for many riders with faults widely spread and some top contenders caught out by a tight turn to the final oxer in the first round. 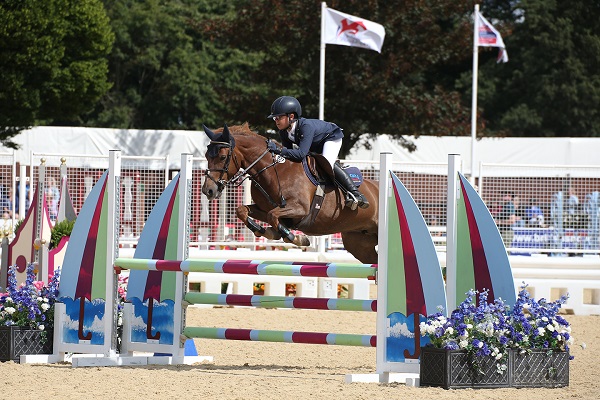 Last year’s champion, Connie Mensley aboard Charlie McDonald’s Madonna, was back to reclaim her crown however it was the sole first round clear of Ashurst Quicksilver III and Ted Holt that claimed the title.

Twelve-year-old, Ted is competing in his last year of 128cm ponies and will soon be moving up the ranks into the 138cm classes. Having started showjumping two years ago, Ted is delighted to have taken the title this morning: “I have been waiting to win a rug ever since I started British Showjumping, so I am over the moon to have won today.”

First to go in the 138cm final and setting the bar for the remaining 25 competitors was Lucy Gilbertson riding Airbourne Freddie. With an incredible time of 31.50s in the jump off, Lucy was in top position from the start after taking a risky tight turn after fence one and picking up speed as the course went on.  With only 6 clears, the pressure was on to beat Lucy’s time however she remained nearly 2 clear seconds ahead of runner up Alice Crowley riding The Agent with a time of 33.14s. 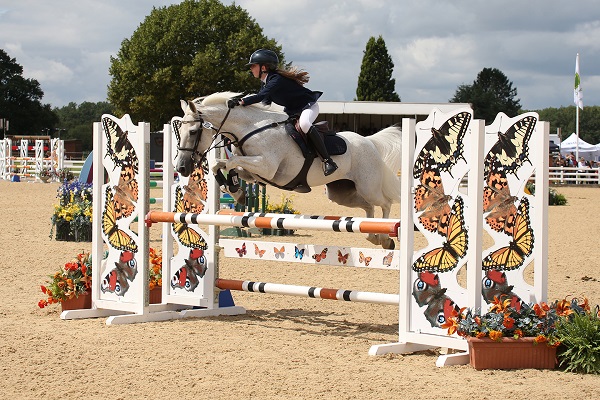 Fresh from their second place in yesterday’s National 138cm Championship, Lucy’s father, Steve Gilbertson explained that the pair had previously won 10 Graham Heath qualifiers to get to the British Showjumping National Championships today and compete in the Pony Silver League 138cm Final: “The other classes we have entered are just for fun, but this is what we came for today.”

The Bronze and Silver Pony/Rider Combination League was introduced by British Showjumping in 2014 and allows all pony riders to be able to track their progress on a regional and national league table. There are three leagues; Bronze, Silver and Gold and they are split into three height categories of 128cm, 138cm and 148cm.