The Calming Effect of Horses

There are many benefits of horse riding for children with autism, autistic people see, hear and feel the world differently to other people and this can cause considerable anxiety.

The rhythmic movement experienced during horse riding has been found to calm this distress and the actual physical contact with the horse may also help to build other relationships and reduce negative reactions.

Communication and empathy may also be increased by the interaction with the horse as their excitement of riding encourages them to speak to their horse and they begin to understand that their reactions can have an impact on how the horse behaves.

Riding different horses, introducing new activities and the rotation of volunteers that help out during riding sessions can assist with the resistance to change that is often associated with autism.

Cameron Branchett has riding been since 2011. When he began to get frustrated with his progress, Malvern Riding School, an Accessibility Mark accredited centre, stepped in to help. Here his Dad, Jonathan, tells his story. 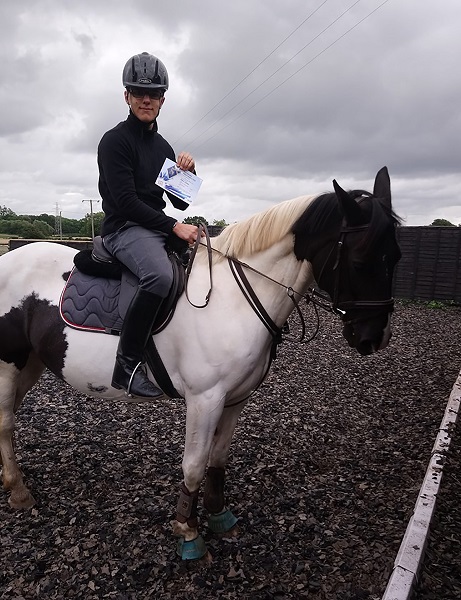 Cameron was diagnosed with Autism Spectrum Disorder (ASD) in December 2006. In 2011, after discovering that the rocking motion on the pelvis when riding a horse released oxytocin that can help calm people, Cameron tried his first riding lesson.

The effect on him was immediate. Trying to cope in a main stream school, Cameron was showing symptoms of Tourette’s Syndrome alongside his ASD. All of this stopped every time he sat on the horse.

He was hooked and we were amazed that a half hour lesson could have such a profound effect on him. They say certain animals have an affinity with humans and this is certainly the case with every horse Cameron has ridden. He forms a genuine bond with them all and they seem to instinctively understand his needs.

With ASD comes difficulties, listening to and understanding complex sets of instructions can be challenging at times. Cameron never expressed any desire to be a champion rider, or show jumper, he just enjoyed riding and trotting.

However, he began to get frustrated with his own limited progress and was starting to find the lessons troubling. In 2016, he was on the verge of giving up. That’s when we turned to Malvern Riding School. Julie and the staff there are simply wonderful.

Within a few months he had mastered his rising trot, something he had never managed in five years! He now canters and jumps with ease and he is so much more confident and enthusiastic about his riding now and determined to become as good as he can be to help him with his dream of becoming an actor.

Julie and the staff, have a way of sensing when Cameron is getting a little disengaged with his riding and quickly change the lessons to keep him interested.

The way they communicate with him really resonates and he responds well to them. The little things like stopping the horse and talking towards him rather than shouting to his back as he rides past make all the difference. They also know the best way to challenge and support him even when he doubts himself.

Accessibility Mark status is awarded to a riding centre that has been approved by the RDA following training and assessment. The close link with the RDA means that it can offer continuous support to the establishment to ensure it provides a first-class experience that aims to be hugely beneficial to riders of varying levels of disability.

There are currently 53 Accessibility Mark-approved centres across the country.