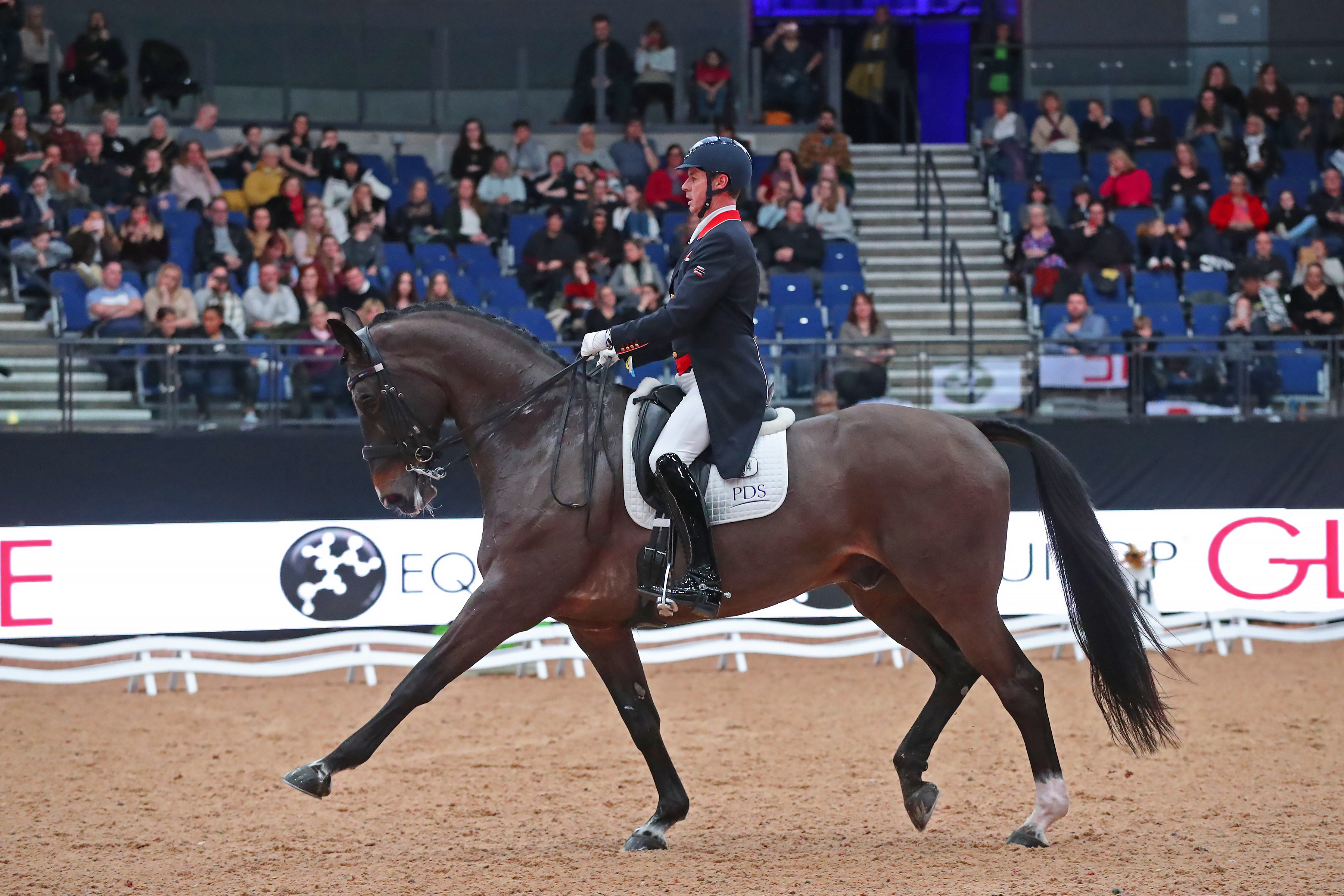 "That was great," he said. "He's a pretty clever old thing. "This is his first show since the national championships in September, and we just do half-an-hour’s warm-up and go for it.

"I only ride him a couple of days a week now, just keeping him fresh. I always look forward to competing at this time of year, and I have managed to to attend most of the dressage sessions held at Liverpool. It's always great to be here."

Carl triumphed by a comprehensive margin, but it proved a keenly-fought contest for the remaining podium places.

Last-to-go Henriette Andersen and Flavio finished in the runners-up spot, scoring 76.938%, a fraction ahead of Louise Bell and Into The Blue on 76.250%, with Jessica Dunn and Alicante Valley a close fourth.

Henriette said: "Coming second to Carl is like winning anyway - I'll take that! "It was quite hard work, though. Flavio hasn't really done indoor shows, and it is quite intense and bright in the arena. It's so lovely to be here, though."

Sunday's action began with the Jolliffe and Co Amateur A 1.15m two-phase, and it was won by a familiar and successful combination. Windsor-based Tony Pearson and Berlin are prolific winners on the amateur circuit, with Liverpool proving a happy hunting ground for them in the past.  And so it proved once again as he delivered a Sunday morning sizzler to take a class of 26 starters.

Drawn early, Tony and his tried and tested partner made short work of the jump-off section, clocking 27.68 seconds for a time that only Irish challenger Carol Gee threatened.  Carol, riding Fernhill Splash, ended on 28.73 seconds, with Grace Wallace and Ecarentina finishing third.

Ten-year-old Alfie Diaper completed a victory double at the TheraPlate UK Liverpool International Horse Show on Sunday. Just 24 hours after the Dorset youngster won the Shetland Pony Grand National at M&S Bank Arena, he was back for more. This time he had a partner, teaming up with Will Fletcher to land the Glenbrook Property mini major pairs after a thrill-a-minute class that saw winners and runners-up separated by less than two seconds. 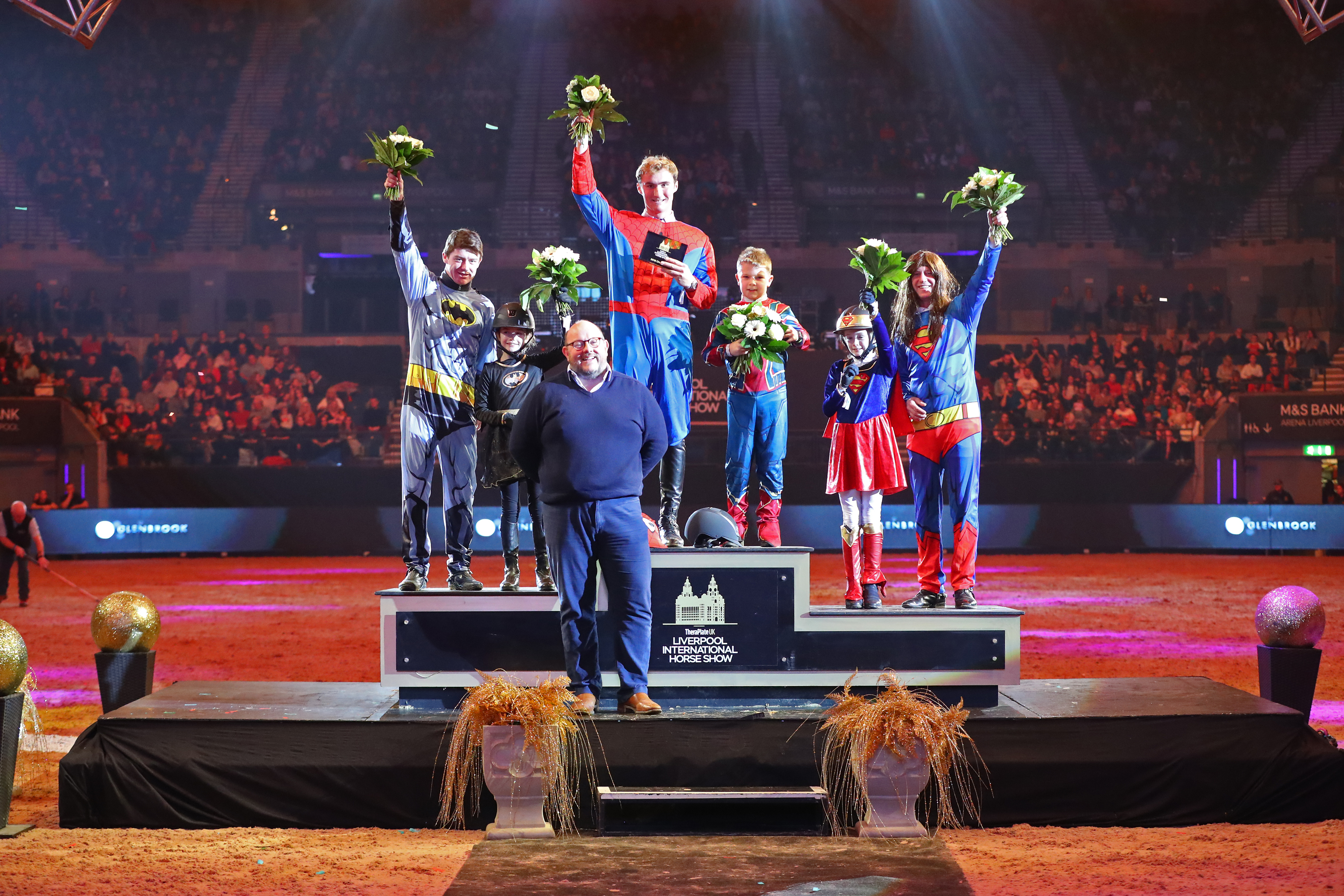 Alfie scorched around the track with his pony Euro Magic, and Will, riding Tiger Bright, followed suit, giving them a combined time of 50.11 seconds.

Ireland's Michael Pender and Saroise O'Neil finished second, while third place was filled by Anthony Condon and Eve McCoy, daughter of former multiple champion National Hunt jockey AP McCoy. "My dream was to come here and win a rug, and now I've done that," said a delighted Alfie.  And Will paid tribute to his partner, adding: "It was fantastic. It certainly happened very fast, and Alfie did an amazing job. The turns were amazing.

"It took me four years to win a rug here!! It's fair to say Alfie has done very well.

"The turns were so tight for the pony riders. It was a really high standard, and we obviously had to go as quickly we we could, and it's brilliant to win here and in front of such a great crowd."