Major Names Head to Cross-Country in the Lead

THE third day of Thoresberton International Horse Trials saw major stars of the sport head to the top of the leaderboard across all four sections.

In the BEDE CCI3*-L Izzy Taylor and Hartacker head to cross-country in pole position for owner Camilla Behrens.

Said Izzy: “It is fantastic to be at Thoresberton in what is a truly brilliant venue with the ground in excellent shape.  I am really looking forward to cross-country day and it is great to be on such a picturesque estate with the team doing everything they can to put on the event.” 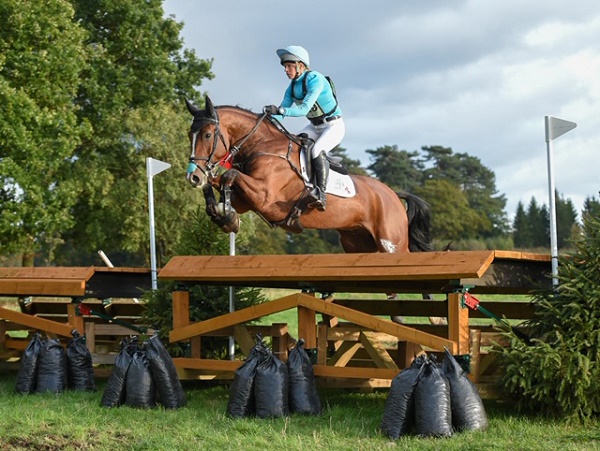 Emily King and Imposant claimed top spot in the BEDE CCI2*-L after the seven-year-old bay shone bright with a consistent performance throughout.

Owned by the Kerr-Dineen family, the 17hh, gelding by Namelus R put on an attractive test that delighted the Clwyd-rider.

“It is great to be out eventing again and the estate at Thoresby looks in great shape, we are very lucky to be here,” said Emily.

Eventing maestro, William Fox-Pitt and Lady Best’s chestnut, Under Oath enjoyed the peaceful atmosphere of the lawn at Thoresby Hall to head the dressage leaderboard in the British Eventing Seven-Year-Old Championship.

In second place is Tom Jackson with HH Moonwalk, while Wiltshire-based Georgie Strang and the mare, Darcey De La Rose are in bronze position.

Two Cooley horses are out in front in the British Eventing Six-Year-Old Championship with Cooley Goodwood and Piggy March holding first and Bubby Upton with Cooley As Ice in second place.

Another rider to praise the Nottinghamshire-venue, Piggy said: “The Thoresby Estate provides a magnificent backdrop for the event and really has an international flavour.  It gives these young horses great experience at a major fixture but the relaxed atmosphere of the lawn was perfect.”

With the grounds team pulling out all the stops to ensure the very best going possible for tomorrow’s cross-country it’s going to be a busy day at Thoresberton International.

After an exciting day at Thoresberton International, Izzy Taylor and Hartacker maintain the lead they gained in the dressage phase with a fantastic clear cross-country over the Thoresby parkland.

The Camilla Behrens owned eight-year-old made light work of Stuart Buntine’s course to continue their progress in the main CCI3*-L section on a day that generally held fair with a scattering of showers interspersed between brilliant autumnal sunshine.

Northamtonshire’s Piggy March, having a great run at Thoresberton so far, also kept the silver placing from dressage day with Sportsfield Top Notch as did Mark Davidson and the attractive grey, Highlight K when maintaining third position.

Holding the lead in the CCI2*-L is Jamie-Lee Day and the eight-year-old, Hanleen Didjeridoo making their trip from North Somerset a successful one after dressage and cross-country.

Jamie-Lee’s scorching round on the eight-year-old, bay gelding really showed the great flow of Stuart’s cross-country course which made its way round the stunning Thoresby Park.

The lawn provides a wonderful bowl for spectators able to see a host of fences from what quickly became a ‘must visit’ vantage point for support teams.

Overnight leader, Emily King and Imposant were left to fight another day after parting company while time penalties for Sarah Holmes and Harley Brown, in second after the dressage, saw them drop way down the leaderboard with 12.8 time penalties.

Emily Young-Jamieson and Obos Nidge hold second place, on the same score as Jamie-Lee but just further off the optimum time, while Caroline Harris and Cadannus hold an additional 0.8 penalties for third place.

Surrey-based Tom Jackson is in first place in the British Eventing Seven-Year-Old Championship with a smart clear round in the showjumping moving them up to pole position with 26.4 penalties.

Overnight leader, William Fox-Pitt and Under Oath fell by the wayside after five fences hit the ground while Frenchman Gaspard Maksud and Zaragoza II moved up to second place after a great clear round leaves him on his dressage score of 29.3 penalties.

Irish rider Susie Berry and Wellfields Lincoln owned by Anne Marling and Sue Wilkinson are in third with the Luidam gelding also moving up the leaderboard after a fantastic clear in the showjumping ring.

In the British Eventing Six-Year-Old Championship with dressage and showjumping complete, Piggy French and the attractive grey, Cooley Goodwood maintain the lead they claimed after the first phase.

Owned by Susie Wood, the Obos Quality gelding gave the show jumps plenty of room to score a clear round and keep their first place with 24.6 penalties.

Cheshire-based Hayden Hankey and Head’s Up moved to second position thanks to their clear showjumping while Bubby Upton and Cooley As Ice dropped a place after one of the coloured poles fell.

With just one day to go, Thoresberton and the stunning Thoresby Park venue continues to receive huge praise from riders and supporters delighted to have the Nottinghamshire estate join the eventing calendar.

Izzy Taylor galloped to success in the main BEDE CCI3*-L section at Thoresberton International Horse Trials, a first time venue event and one that met with great approval from riders and their support teams.

The Oxfordshire-rider and Hartacker battled to the end with a superb clear in the showjumping to maintain their lead over Piggy French and Sportsfield Topnotch.

Said Izzy: “He is a very exciting young horse and just ate up the cross-country.  He is very classy and good in all three phases.  I have had a fantastic time here and really enjoyed the cross-country which was a proper track.  With the weather and ground, it has been testing but he has learned a lot for the future.”

Added Piggy of Sportsfield Topnotch: “He is a beautiful horse and has everything for five star level, he just needed time to grow into himself and is definitely one of my favourites. “

Flintshire’s Sian Davies-Cooke and Intentie W were in triumphant mood in the BEDE CCI2*-L when taking the lead just ahead of young rider Serena Kullich.

It was one of the biggest win’s for Sian and the talented seven-year-old bay, who shows all the promise of going much further in the sport. 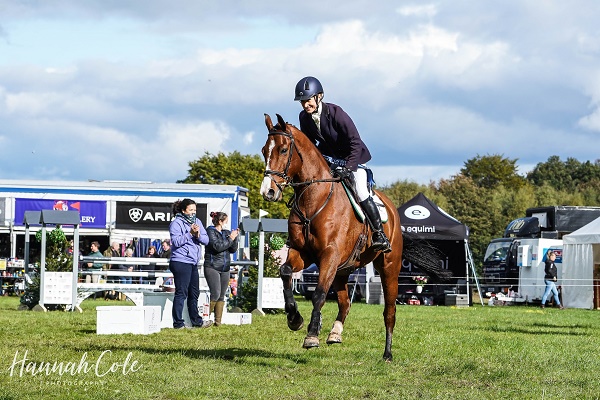 Said Sian: “What a brilliant day, myself and Jane Davies own the horse and it is her birthday today, so a very special occasion for everyone involved.

“We bought Intentie as a five-year-old from Holland and he was really consistent in all phases, starting with a really lovely dressage test, super cross-country and clear in the showjumping, I couldn’t be more pleased.”

In second place, 20-year-old Serena Kullich and Cognac Des Iris were at just their fourth event together, the Surrey rider having bought the eight-year-old from France last year.

Said Serena: “He is such a star, I am aiming for young riders with him and this weekend he showed so much talent the future is very exciting.  He just made it feel easy and we have really got to know each other here at Thoresberton.”

Overnight leader, Jamie-Lee Day fell to third after an unlucky pole at the last but the Bristol-based rider remained delighted with the result and praised her ride, Hanleen Didjeridoo.

“I have really enjoyed the brilliant venue at Thoresby Park and the organisers did a fantastic job simply to run.  Yes it was disappointing to have the last fence down but he has finished full of beans and I have had a great time.”

Tom Jackson’s trip to Thoresberton rounded off with a fantastic finish in the British Eventing Seven-Year-Old Championship with a brilliant win on HH Moonwalk. 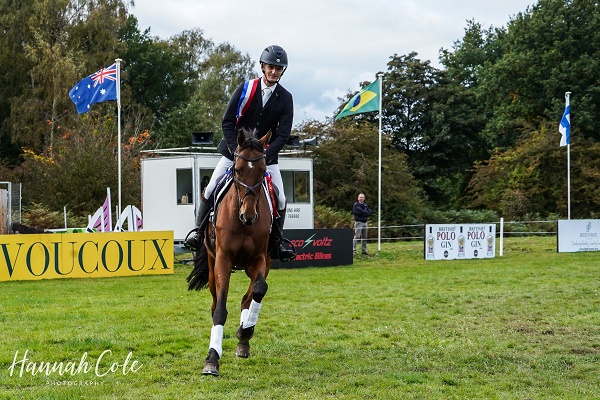 After finishing the showjumping in the lead, Tom and the attractive bay cruised round the cross-country on the magnificent Thoresby parkland to stay at the top of the leaderboard finishing on a score of 28.4.

Said Tom: “I am over the moon with the result. He is fairly inexperienced at this level so to come here and win is just fantastic.  We will hopefully start the spring season with a long format three star, he is very promising so will be produced with the future in mind.”

Frenchman Gaspard Maksude and Zaragoza II were just behind with 29.3 penalties, the talented mare giving him much to be excited about.

Said the Crawley-based rider: “She can be tense in the dressage so we need to take care in the first phase but when it comes to the jumping she is very fast and careful.  The time is not a problem and she has so much scope, it has been a great event.”

Piggy French was busy throughout Thoresberton with a host of rides and was delighted with third place on Geoffrey Burton’s attractive homebred, I Diablo Joe.

Said Piggy: “He is very special and a pleasure to produce and be around.  It is extra special when they are homebred and tries really hard in all three phases.  I have a wonderful team of young horses at the moment so there is a lot to look forward to.”

Another talented youngster to be sourced from Richard Sheane in Ireland, Piggy was full of praise for the Obos Quality gelding.

Added Piggy: “He is a lovely horse, that has been with us since the end of his four-year-old year.  He is very scopey and talented and can turn his hand to anything.  His owners are great fun and very loyal and he looks set to be one for the future.”

Holding runner-up position overnight, Cheshire’s Hayden Hankey and Heads Up maintained their second place as did Bubby Upton on Cooley As Ice when finishing third in what was a well fought championship.

Head’s Up continues to show his versatility and talent, a winner of the Horse of the Year Show Working Hunter Championships a year ago, the Catherine Witt and rider owned, bay gelding, was found by Hayden in Ireland two years ago.

Said Hayden: “He came from my good friend, Jim Derwin and really has five star potential.  He is a brilliant showjumper as well and has done about eight events.  He has the ability to be world class and we just need to look after him and produce him with the future in mind.”