Holly is described as ‘bargy’. She has injured several people in her hurry to leave her stable after breakfast, and if you can get her safely out of the barn, she will drag you all the way to the field.

Red is nearly un-rideable over the winter months. He spooks at everything, pays no attention to his rider, and can’t hack out alone while he is quite happy with this over the summer months.

Meanwhile, Marley is totally un-handlable! He lunges and bites whenever a person comes near. He’s been referred to me by the local vets as they can’t get near him to check if he’s physically OK.

Felicity George, the Chair of the Equine Behaviour Affiliation, writes:

“There are lots of possible causes for the behaviours described above. However Holly, Red and Marley had one thing in common – their change in behaviour happened following changes in management as winter approached. All of them were not coping with the changes. Each horse is individual in the day to day routine they can cope with, and how they feel and behave when they can’t cope.

“Marley was getting enough food, but over too short a period – he was going for over 12 hours a day with nothing to eat, and with the additional problem of a sore back, he had become very aggressive. Ad lib hay in small holed nets was all that was needed to settle him so that he could get proper diagnosis and treatment for his physical problems, and he is now happily back in ridden work and a pleasure to handle.

“Holly was stabled alone, and turned out twice a week for a couple of hours. She basically needed to stretch her legs and catch up with her friends! Moving her to a stable where she could see and touch field mates, and turning them out together in an arena a couple of times a day helped her.

“There wasn’t any practical way for Red’s owner to get him turned out more during the winter I saw him, but she was able to move him and two equine friends into a small barn area instead of stabling them individually which made the world of difference to Red – and to his owner who could now ride him without fearing for her life!

“The ideal in management is, I think, well expressed by Lauren Fraser’s term ‘Friends, Forage and Freedom’ – freedom to move, to be able to spend time with their friends as they want, to eat, drink and rest when they want to. This isn’t always possible, but the closer we can move to this the happier and healthier our horses will be, and seemingly small changes can make all the difference.”

The Equine Behaviour Affiliation runs workshops and events throughout the year with membership starting at only £25 a year.  The EBA Applied Behaviour Course is the most comprehensive and up-to-date course of study an owner can undertake – and Lantra accredited.  The next course, with Felicity George, starts on 25th January in Stirling, Scotland.  Email hello@equinebehaviouraffiliation.org asap… or wait until next year! 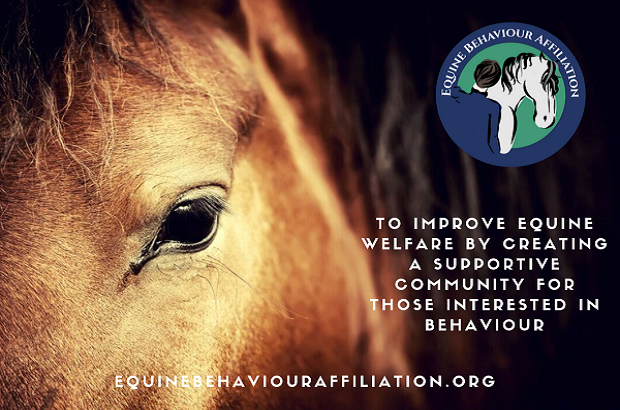