David Deillon - Moving with the Times 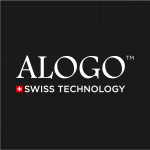 The new Alogo movement sensor has been researched and developed over a number of years and is the most accurate technology ever implemented in an equine sensor. Here we talk to CEO David Deillon, the brains behind Alogo and how he came up with the idea.

1, Tell us about your background in the world of Showjumping.

I started riding at the age of eight - I was born in 1986 - and started show jumping in 1998, just having one year on ponies before moving on to horse’s very quickly.

After finishing my studies in 2005, whilst also competing and riding three horses after college, I rode as a professional show jumping rider for 10 years.

During that time, I competed and ranked at the highest level (5*) within the Swiss Team.  Among the highest achievements, I participated (and ranked) three times at the CHI Geneva (5*), at the CSI 5* in San Patrignano, at the CSIO in Linz and Copenhagen with the Swiss Elite Jumping Team. I was also giving training sessions to several students that I also followed in competition.

I successively trained with several coaches, starting with Jürg and Conny Notz, then with the German coach Susanne Behring when I was at the Christina Liebherr stable. I have also followed training courses with Christina Liebherr, Heidi Hauri-Robbiani, Manfred Kötter and Edwin Smits.

I am very fortunate to still find the time to ride every day at home in Switzerland.

2, Was there a specific moment when you decided there was a need for the Alogo?

I was always very interested in new technologies since I was young and analysed my performances riding and competing with my horses.

I would ask my father or groom to take a video at shows in order to analyse every movement and try to match what I had felt when riding with the video. However, I started thinking there was something more that could be done to take it to another level.

It was when I started studying again in Digital Marketing that the idea came to me. I received a running tracker in 2012 called Jawbone UP (it was one of the first on the market at that time) and I was very excited to try it on my horses. 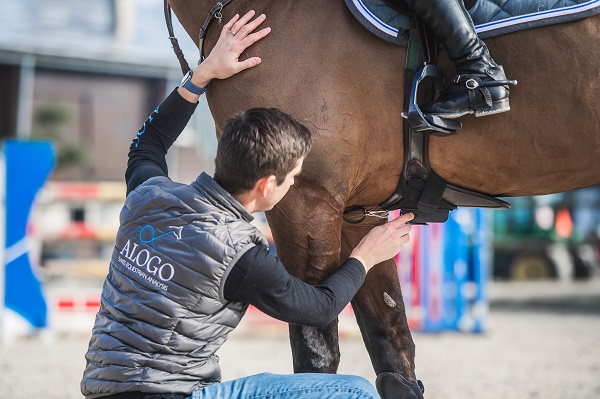 The results were very surprising because the tracker showed me that I was running and not riding! I was so disappointed but at the same time I knew I could do something for the equestrian sports.

I then identified two situations where the technology could help.

Firstly during a live equestrian competition. One day I was at the CHI Geneva show jumping spectating with friends that don't know anything about our sport. During the whole class, I explained to them my personal analysis of why I think the horse did a mistake or why that horse appeared to be faster but at the end was second! I saw that our sport needed live statistics in order to help the public to better understand it and increase its interest.

Secondly as a rider and a coach. I remember when having some training courses with my coaches, the feeling I had didn't necessarily match with the feedback from the coach. I always listened to my coaches, always, but I thought something was missing between us such as objective data or facts about what happened. The coach sees from the outside but doesn't "feel" the horse. The rider feels the horse but doesn't "see" from the outside. Then I started to list every parameter I wanted to "see" as a rider but also as a coach.

3, How did the idea for Alogo develop?

In 2014 I decided to start a pilot project in collaboration with another startup. I helped them to adapt their technology for the equestrian sports and we had a first contract with an international showjumping competition one year later.

At the end of 2015, the company was acquired by a US company that focus on another sport and the equestrian project was stopped. However, after providing live statistics to that event, I had a huge traction from event organisers, coaches and riders from around the world, which motivated me to create Alogo Analysis in 2016 with a new team.

We first developed Alogo Live and signed with several international showjumping competitions from the beginning such as the Longines Paris Eiffel Jumping and the CHI Geneva. The CHI Geneva is still our client since 2016 and we recently signed another three year contract, as well with the Rolex Grand Slam of Showjumping.

At the end of 2016, I wanted to go deeper into the analysis of the movement of the horse. With the selling of our service Alogo Live, private funds and the help of the Swiss state through startup funds, I started the development of Alogo Move Pro.

I first listed all the data I wanted to analyse, especially the real trajectory of the horse, and I searched for partners who could help me develop Alogo Move Pro. We had a first Proof of Concept in 2017 and the first working prototypes in 2018.

At the end of 2019 we successfully raised 1 Million CHF in order to bring the product to the market. Due to the COVID-19 pandemic, the first products were delivered to our first customers in early 2021.

4, Tell us about the technology behind it?

After providing the list of features that I wanted to analyse, we noted that there was no sensor on the market that could achieve the level of accuracy I wanted as well as the data requested and the ability to collect them in a very simple way with a single sensor.

This was why we developed from scratch our own custom board. We use a combination of very high technologies software and hardware such as AI Algorithm, Machine Learning and proprietary hardware that is used in aeronautics industries. The Move Pro has a built-in GPS chip, an IMU and collect 100 data per second. It can be used with or without the smartphone for recording sessions. The data are transferred over BLE to the smartphone on an App. Once synchronized, the data can be accessible from any devices: smartphone, tablet and Mac/PC. 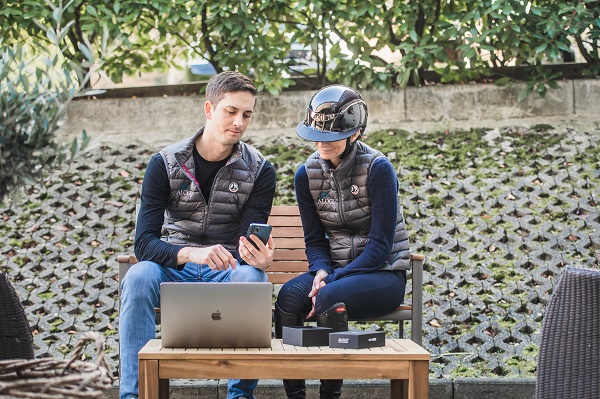 One last thing about the accuracy, we have validated scientifically the data and its accuracy and we are the only customer oriented horse motion trackers to have scientific validation.

5, Are there any particular success stories you can tell us about?

"During the Swiss Young Riders championships, a rider had three poles down on the first day. We looked at Alogo Move's data and we came to the conclusion that this particular horse jumped much better with a longer last stride length before the fence, despite his small size.

“The next day, the horse jumped a very nice clear round as the rider gave him much more space to the horse before the fence. I spoke to the coach after the class and I told him about what we discussed with the rider the day before. At that moment, the coach told me the rider didn't want to listen to him when he was saying he had to give more space before the fences! The coach was really impressed that the sensor can give such data and provided proof to the rider about what he was saying.

"On another occasion a Junior rider during the Swiss Championship did an amazing clear round in the final but four down in the second round. The coach told me right after: "It will be interesting to see that the rider was much faster during the whole course." Surprisingly, the rider didn't change the canter speed! The data showed a lack of accuracy before each fence, then a higher speed over the fence and a drop in regularity. But the canter stride was exactly the same!"

I'm always really happy when I receive a call from happy customers that tells me: "Your product is awesome! It can show things that we never saw before!"

We have tested different saddles as well as different bits and their influence on the behaviour of the horse. The dentist who made a new bit ask the client what their feeling was when riding with the new bit. He was really impressed that the sensor was exactly showing what the rider felt but he also told me: "I should be careful because if the bit is not a perfect fit, the data from the Alogo Move Pro will show that as well!"

To find out more and order stock of the Alogo Tracker visit https://www.zebraproducts.co.uk/brands/alogo. Or for further information contact Zebra Products on (01352) 763350.