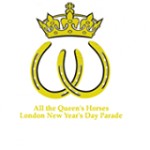 To get your horsey fix over the festive season, how about ‘All The Queens Horses’ at The London New Years’  Day Parade?

Amongst jugglers, cheerleaders, acrobats, clowns and marching bands, the parade also features three teams of riders and 75 horses. Invited for selection from all over the UK and travelling from as far afield as Belgium to appear in this annual event, the riders range from just six years old through to late seventies and are unpaid volunteers unified in their passion for horses and bringing equestrianism to the capital!

The equestrian element of the parade starts off 11.45am at Piccadilly Circus, Lower Regents Street and follows the route up through Waterloo Place and Trafalgar Square Whitehall, Parliament Square- Horse Guards and finishing at Buckingham Palace.

Each year the parade celebrates a theme, with previous year’s including Swinging Sixties, Hats Off To London and The Queen’s Diamond Jubliee. 2015 is ‘London Moving' year and alongside creative costumes, there will be horses and carriages, sidesaddle costumes through the ages and the ‘Iberian Team’ in full traditional dress.

The event is free to watch and alongside the horses, there’s plenty to keep everyone entertained!